The Story of an Island

The Story of an Island 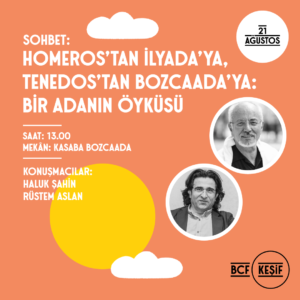 Conversation: From Homeros to the Ilyada, from Tenedos to Bozcaada: The Story of an Island

Bozcaada; or as it was called in Homer’s legendary epic poems the Iliad and the Odyssey, Tenedos;

The endless winds that run through the island for more than 5 thousand years have not only shaped the characteristics of the island population, but also left its mark on the island’s mythology. Every community had their own Tenedos; shaped by the same wind, sun, land and the sky but always managed to create either a conflict or a love story between these mythological figures.

There is a long story between the Trojan War and Homer’s poems the Iliad and the Odyssey, where Tenedos (Bozcaada) plays a magical role. To dive into this mythological adventure, meet us in Kasaba Bozcaada on August 21st, Saturday at 13.00 for the event “From Homer to Iliad, from Tenedos to Bozcaada: The story of an island”. ?️
Please refer to our bio for the link to the participation form both for this event and other free Keşif activities.
–
#bcf #bcfkesif #bozcaadacazfestivali